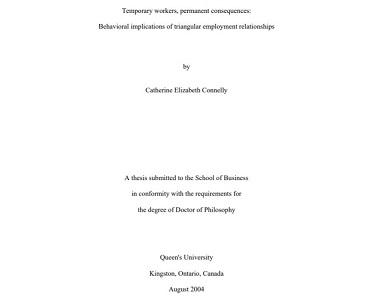 The modern workforce has changed dramatically from a generation ago; many workers can no longer anticipate permanent employment with a single organization. The proportion of workers who have a temporary employment relationship, and who find work through an intermediary, is increasing rapidly. However, despite this upsurge in intermediated temporary work, our understanding of the intricacies inherent in the resultant triangular employment relationship is limited.

As a preliminary step, new measures of organizational citizenship behaviors and counterproductive workplace behaviors (towards both temporary firms and client organizations) were generated from a series of interviews with current and former temporary workers and supervisors. These metrics, which are specifically relevant to intermediated temporary workers, were pre-tested in a survey to ensure their validity, and were then used in the final study.

Several control variables, including tenure, age, and gender, as well as moderators that included organizational identification and perceived threats of sanctions, were not found to be significant. This dissertation concludes by drawing implications for practice and suggesting directions for future research.